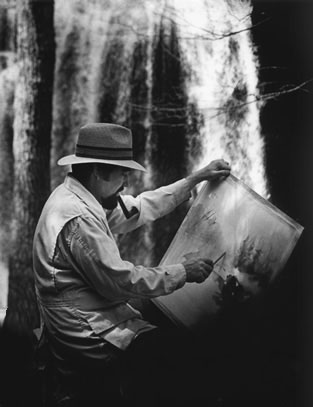 Hubert Shuptrine (1936 – 2006), a native of Chattanooga, Tennessee, had a Bachelor of Science degree with a minor in fine arts painting from the University of Chattanooga (now the University of Tennessee at Chattanooga).  He was an accomplished artist with an insightful approach to depicting America’s heartland, its people, its traditions, and its landscape.  Whether focusing on the pattern of creases in a timeworn face, the tiniest strands of whiskers in a bristly beard, or the uneven rhythm of weathered boards on the side of an old cabin, Shuptrine penetrated the surface of his subjects to reveal their inner spirit.  In depicting people, he saw his images more as a form of visual biography than as portraiture.  His goal was to reveal in all his subjects “the sum of moments—past, present, and future, infused into a single glance.”

Shuptrine’s brushwork ranged from broad washes of subtle color to a drybrush technique characterized by tiny strokes of tightly controlled pigment.  This enabled him to render broad atmospheric effects such as mist laden skies, or morning light spilling through a window, as well as intricate details and textures.  However impressive, his realistic technique in no way diminished the expressive power of his paintings.  As Shuptrine maintained, “I don’t think of myself as a realist because if you look up that word in the dictionary, it is one who paints with precision without regard for ideology, feeling, or potential of meanings.  I refer to my works as ‘realizations’ because I like the subjective part of painting as much as the objective part of painting.  I like to be involved with my subjects so that what I am painting is emotion as much as surface appearance.”

The publication of his first book, Jericho: The South Beheld, (1974) brought him national recognition and broke all records in the history of art book publishing.  Following the first edition of 150,000 copies, a second edition of 25,000 was sold.  His second book, Home to Jericho (1987) also received national acclaim and sold 75,000 copies.

He was the recipient of the University of Tennessee at Chattanooga Distinguished Alumnus Award; the Sigma Phi Epsilon Fraternity Citation; commendations by the U. S. Senate, U. S. House of Representatives, Tennessee State Legislature, and in 2005 named Distinguished Artist at the Governor’s Awards in the Arts sponsored by the Tennessee Arts Commission; an honorary membership in the University of Tennessee Alpha Scholastic Society; Key to the City of several southern cities; and was listed in Personalities of the South.  His works are held by private collectors nationwide and are included in numerous corporate and museum collections.  A dynamic speaker, Shuptrine was a keynote spokesman for art to a wide range of audiences.